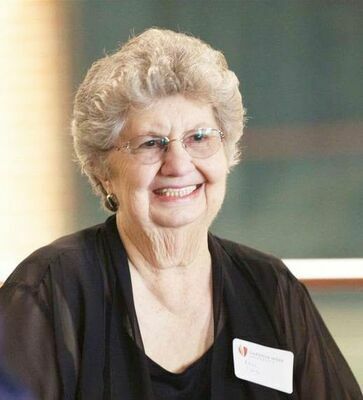 Rhealene “Rhea” Bryant Lamb passed into eternal life on February 20, 2021. She was the first of six children born to Gordon Vick and Glenda Pugh Bryant in Grand Saline, Texas, on July 14, 1933. She was a graduate of Grand Saline High School, Baylor University (B.A.), Waco Texas, and Appalachian State University (M.A.), Boone, N.C. She loved teaching school and served in her hometown, Grand Saline; in Waco, Texas; on the Navajo Reservation in Ft. Defiance, Ariz.; and in Nashville, Tenn. She retired from the Cleveland County School System in North Carolina.
On Aug. 5, 1961, Rhealene was married to Robert Lee Lamb in her home church, Main Street Baptist, in Grand Saline where he was serving as the Minister of Music and Education while completing work at Southwestern Baptist Theological Seminary, Fort Worth, Texas. They moved to Boiling Springs, N.C. in 1962 where Bob began teaching at Gardner-Webb University. They found a home there and enjoyed the adventure of Gardner-Webb’s growth and development.
Rhealene was an active member of Boiling Springs Baptist Church where she served in many areas, especially in missions: she was lovingly called “Mama Missions.” She has served many years as the Secretary of the Fellowship of Baptist Educators, a national organization of 900 members. She was a loving, supportive mate to her husband, Bob, of 59 years. They worked together as a team in many endeavors. She was also a loving mother to her children and grandmother to her grandchildren, who called her Grandma Rhea, and they adored her.
She is survived by her husband, Dr. Robert Lee Lamb, and her children, Dr. Robert Earl Lamb, Melbourne, Fla; Dr. Mary Rebecca Lamb (Kim), Avondale Estates, Ga.; and Beth Manning (Noel) of Boiling Springs, N.C. She is also survived by her grandchildren, whom she loved and was proud of: Kathryn and Thomas Manning of Boiling Springs; and Sam, Ellie, and Zach of Avondale Estates, Ga. She is also survived by brother Don Bryant of Grand Saline, Texas; brother John Bryant (Glenda) of Cranfills Gap, Texas; sister-in-law Lil Bryant of New Iberia, La.; sister-in-law Debbie Bryant of Grand Saline, Texas; and numerous cousins, nieces, and nephews.
She was predeceased by her parents, her sister Rebecca Bryant, her brothers Glynn and David Bryant, and a sister-in-law Brenda Bryant.
In lieu of flowers, memorials may be made to Robert and Rhealene Lamb Endowed Scholarship of Gardner-Webb University, P.O. Box 997, Boiling Springs, N.C. 28017 or to WMU-NC, P.O. Box 18309, Raleigh, N.C. 27619-8309.
A private memorial service to celebrate her life will be held on Tuesday, February 23, 2021 at 2:00.
Cecil M. Burton Funeral Home & Crematory is serving the family.
Condolences may be expressed to the family online at www.cecilmburtonfuneralhome.com