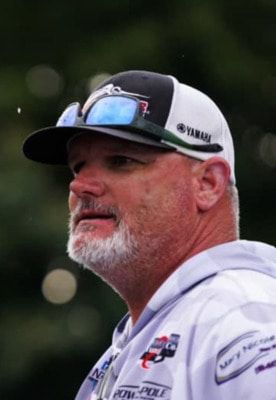 Services for Kenneth “Skeeter” Fowler, 50, of Grand Saline, were scheduled for 10 a.m., Saturday, September 18, 2021, at Sand Flat Baptist Church with Bro. Kevin Passons and Bro. David Yarbrough officiating.
Burial followed in Sand Flat Cemetery under the direction of Bartley Funeral Home, Grand Saline.
Skeeter Fowler passed away September 12, 2021, in Memphis, TN. He was born October 3, 1970, in Mesquite, to Melvin Wayne & Alta Diane Burk Fowler. Skeeter spent his early years in Seagoville, where he graduated from Seagoville High School, Class of 1989. After high school, he pursued his baseball career at Eastfield College and then joined the USAF. Skeeter returned home, met and married the love of his life, Amy Medrano, and started his family. Koltyn was born in 1992, Austyn in 1994, the family moved to Grand Saline in 1998 and Daltyn was born. He was in the trucking industry for over 30 years, owning his own business for the last 15 plus years. Skeeter’s true love was fishing, and he was involved with local fishing and bass clubs, and state tournaments. He fished all over Texas and moved on to the National Professional Fishing League where he fished throughout the USA. Skeeter founded, owned, and operated “Little Angler’s Big Bass Showdown”. He was also a supporter of K-9s4Cops. Skeeter was preceded in death by his father-in-law, Alfonso “Wello” Medrano.
Survivors include his wife of 30 years, Amy Fowler of Grand Saline; parents, Melvin & Diane Fowler of Palmer; mother-in-law, Remona Satterwhite of Mineola; three sons, Koltyn Fowler (Tricia) of Lindale, Austyn “Sporty” Fowler (Tambra) of Lindale; and Daltyn Fowler (Lindsey Catherwood) of Tyler; brother, Bruce Fowler (Christina) of Grand Saline; two grandchildren, Mason James Fowler and Breck Austyn Fowler; and numerous other relatives and friends.
Pallbearers were Brent Person, Gerald Bolin, Brian Robison, Jeff Reynolds, Patrick McNutt, and Ralph "Bubba" Robertson.
The family received friends 6-8 p.m., Friday, at the funeral home.
From the National Fishing League: From the inception of the NPFL Skeeter Fowler was an advocate and resource for our organization. Skeeter lived his entire life for God, his family, and fishing. He was continually investing time and effort to grow the sport and spent time with his sons doing so. Skeeter was a fierce competitor and worked extremely hard on and off the water to be a positive influence to those around him. Whether teaching fishing, competing, or raising funds for someone’s cause, Skeeter gave all he could to support others in the sport he loved so much. Never forgetting to focus on family and tell folks how much he loved his family. He was an extremely proud Husband, father, and Grandfather! Please remember Amy, the Boys, the grandkids and his Mother, Father, and Brother through this difficult time. Skeeter Fowler left us too soon but has started his heavenly journey today where he will continue to watch over and protect us all.